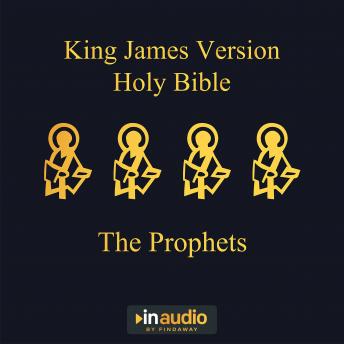 Explore the words and stories of the major and minor prophets of the Old Testament in this collection.

In the Bible, “The Prophets” are books written by people chosen by God to deliver messages from him about his people, the future, and the events that he would allow to happen throughout eternity. These prophet books are important for many reasons. These books give a good understanding of what God’s people were thinking about and focusing on throughout major events of history, while also giving context to the New Testament, and giving the writers of the New Testament prophecies through which to analyze events throughout the life of Jesus.

The prophets comprise 17 of the 39 books of the Old Testament and comprise most of the latter half of the book. The prophet books are split into two categories: major and minor. This audio collection includes all 17 books:

This audio is presented in the King James Version translation, written in 1611 and using the formal English vernacular of the age. This translation is regarded as one of the best English translations from the original Hebrew and Aramaic languages. 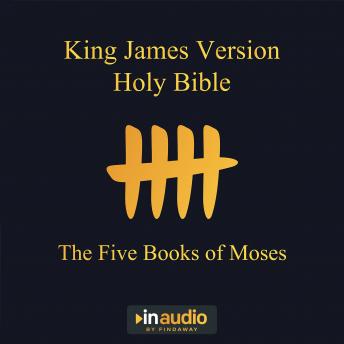 Learn about the early foundations of Judaism and Christianity in the King James Version of the five books of Moses.

The five books of Moses are referred to as the Pentateuch, and encompasses the first five books of the Old Testament: Genesis, Exodus, Leviticus, Numbers, and Deuteronomy. These books give the foundation for Jewish law and religion, and outlined the covenants given to Jewish people by their God. It is also largely the story of Moses, the man chosen to lead God’s people into the home he had placed for them.

Genesis – Genesis is a narrative about the beginnings of life, the Earth, and God’s provenance over humans. This book contains many of the most well-known Bible stories: creation, the Garden of Eden and fall of man, Noah and the flood, Joseph sold by his brothers into slavery, and more. This book sets up the covenants that God made with his chosen people.

Exodus – Exodus is the continuation of the overarching story started in Genesis of God choosing a group of people to deliver from hardship in exchange for their obedience to him. Exodus tells the famous story of Moses rescuing the Israelites from slavery in Egypt, the plagues God sent upon the Egyptians, the first Passover, and the giving of the 10 commandments, as well as many other laws for God’s believers to follow.

Leviticus – Leviticus is a book full of laws, rituals, and moral statements. This book is a detailed account of all of the commands and instructions given by God to Moses to convey to the Israelites for how to live as God’s people.

Numbers – Numbers is the beginning of the Israelites’ journey to take Canaan, the Promised Land, into their own possession. They prepare for their trek but end up not following through on the orders from God, and are punished for their lack of faith by never reaching the Promised Land for themselves.

Deuteronomy – After the Israelites are condemned to never see the Promised Land, they wander for 40 years in the desert, with Moses delivering sermons and diatribes on the laws set in place. Deuteronomy follows the final days of Moses, his passing of leadership to Joshua, and his death. 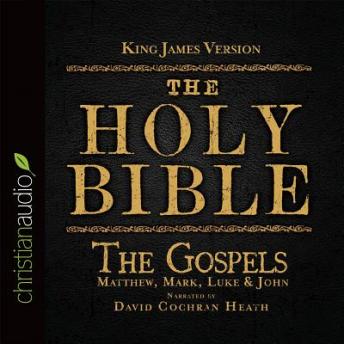 The Gospels The King James Version has continued to this day to be one of the most beloved and widely sought after translations of the bible into the English language. Now over 400 years old, the King James Version has been shaping Christians for centuries with it’s majesty and solemnity.Narrator David Cochran Heath brings his voice of clarity and warmth, making listening an experience the hearer will want to return to again and again. 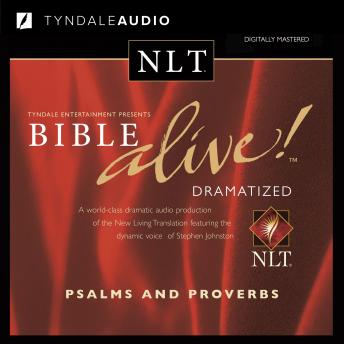 Enjoy the power and clarity of the New Living Translation in this special edition of Bible Alive! featuring Psalms and Proverbs and Emmy Award-winning narrator Stephen Johnson.

Bible Alive! is a ground-breaking, dramatized recording of the clear, easy-to-understand New Living Translation. Featuring the brilliant, contemporary voice of Stephen Johnston, Bible Alive! lets you experience the Bible in all of its magnificence and power, inspiration and intrigue. A cast of Tony, Emmy, and Golden Globe Award-winning actors (not present in this offering), dramatic sound effects, and a compelling musical score are combined to create this unforgettable listening experience. 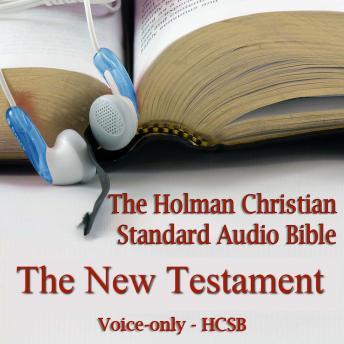 The Holman Christian Standard Bible is one of the mostaccurate translations of the scriptures. In the New Testament gospels you willdiscover the virgin birth, ministry, crucifixion, and bodily resurrection ofthe Lord Jesus Christ written from four different yet perfectly harmonizedvantage points. Historical and life altering biblical truths are proclaimedfrom the birth of the early church to the spread of the Gospel through Paul,Peter, John, and others in the epistles. Best of all, the New Testament endswith vivid prophetic detail of the bodily return of Christ Jesus as he takeshis rightful place as Lord of all.
Let professional voice artist Dale McConachie, narrator of over onehundred audiobooks, take you on a journey through the New Testament, where youwill discover what God is looking for in his followers’ lives as they facevarious tests in life. Dale’s goal in this recording was to make a simple butreverent audio copy of God’s Word that you can take with you everywhere you go-while you commute, in the kitchen, or at the gym. You can easily access the NewTestament at any time. 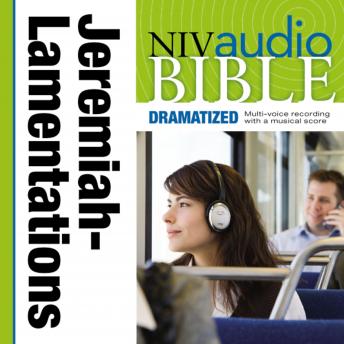 This dramatized audio version of Jeremiah and Lamentations in the NIV brings the Bible to life with this true-to-text dramatization of God’s Word.  The fully orchestrated background enriches the text reading and enhances the total experience.  Digitally engineered from start to finish, this audio Bible delivers an inspiring and uplifting encounter with the Word of God. 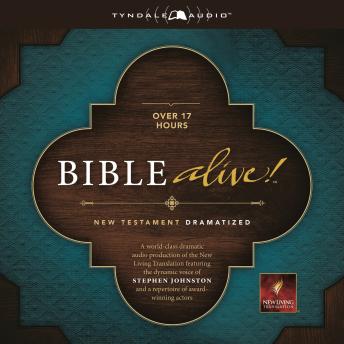 Features: Dynamic voice of Emmy Award-winner Stephen Johnston Supporting cast of Tony Award-winning actors Over 17 hours of inspirational listening Original music and sound effects Fully dramatized, multivoice recording Digitally mastered for optimum clarity
“This is really a quality production! When they say the Bible comes alive, they mean it. I really recommend this. The narrator is just who they say he is . . . a great voice and the actors and stuff really work. It’s hard to believe it’s a word-for-word Bible.” -An actual listener 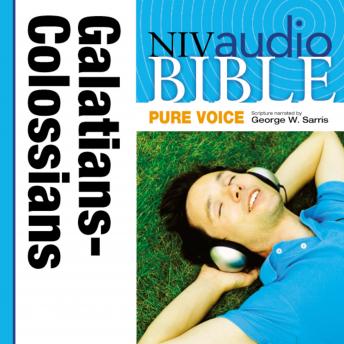 This is more than a Bible you listen to; it’s an experience that helps you enter God’s Word … so God’s Word can enter you. Narrated by George Sarris, a well-known spokesperson for several Fortune 500 companies and a talented communicator, this audio edition of Galatians, Ephesians, Philippians, and Colossians in the beloved New International Version (NIV) will reignite your passion for the Word of God. 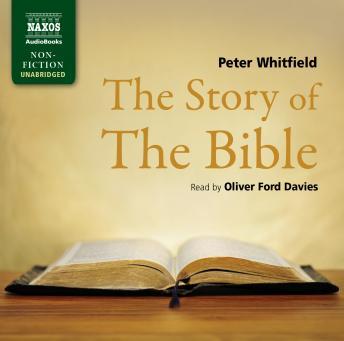 Free Download The Story of the Bible By Peter Whitfield Audiobook

The Story of the Bible By Peter Whitfield Audiobook

History or myth? The word of God or the words of men? What is the Bible? This history, especially written for this recording, describes clearly and concisely how the Bible came into being, what it contains and its appearance in the ancient languages of Aramaic, Hebrew, Greek and Latin. After 400 years, the King James Version remains a religious text and a literary epic, though many other translations before and since – William Tyndale, the Good News Bible – have influenced generations. This fascinating, accessible introduction places the Bible in its religious and cultural context, showing why men lived and died in its shadow. 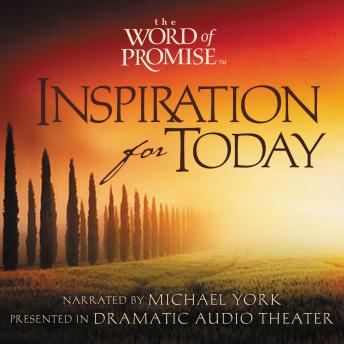 Encounter the Word of God in short, practical devotional segments designed for listening on the go.

Inspiration for Today includes 40 three-minute devotions from the New Testament, equaling two hours of inspired listening time. Each devotion will include an excerpt from The Word of Promise Audio Bible in the New King James Version (NKJV), an insightful reading by Michael York, and meditative music from composer Stefano Mainetti.