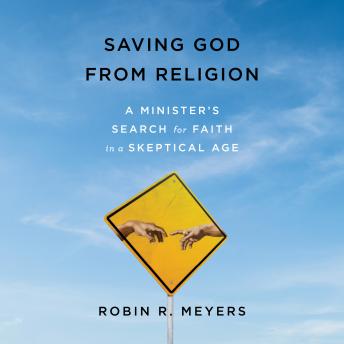 Read Saving God from Religion: A Minister’s Search for Faith in a Skeptical Age By Robin R. Meyers Audiobook

Saving God from Religion: A Minister’s Search for Faith in a Skeptical Age By Robin R. Meyers Audiobook

A revelatory manifesto on how we can reclaim faith from abstract doctrines and rigid morals to find God in the joys and ambiguities of everyday life, from the acclaimed author of Saving Jesus from the Church

“In this book of stories from four decades of ministry, Meyers powerfully captures what it means to believe in a God who’s revealed not in creeds or morals but in the struggles and beauty of our ordinary lives.”—Richard Rohr, bestselling author of The Universal Christ

People across the theological and political spectrum are struggling with what it means to say that they believe in God. For centuries, Christians have seen him as a deity who shows favor to some and dispenses punishment to others according to right belief and correct behavior. But this transactional approach to a God “up there”—famously depicted by Michelangelo on the ceiling of the Sistine Chapel—no longer works, if it ever did, leaving an increasing number of Christians upset, disappointed, and heading for the exits.

In this groundbreaking, inspiring book, Robin R. Meyers, the senior minister of Oklahoma City’s Mayflower Congregational United Church of Christ, shows how readers can move from a theology of obedience to one of consequence. He argues that we need to stop seeing our actions as a means for pleasing a distant God and rediscover how God has empowered us to care for ourselves and the world. Drawing on stories from his decades of active ministry, Meyers captures how the struggles of ordinary people hint at how we can approach faith as a radical act of trust in a God who is all around us, even in our doubts and the moments of life we fear the most.